Cathedral-Mosque of Cordoba for architects (I). 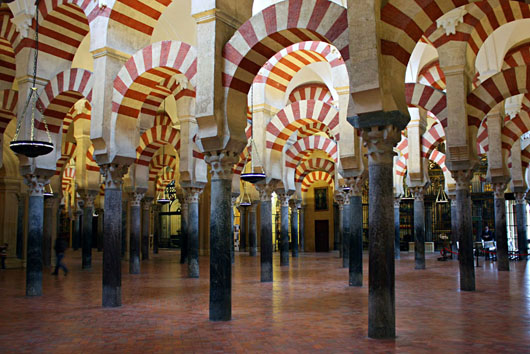 Cathedral-Mosque of Cordoba is a sublime building with a very special historical and architectural developments and where opposed spatial criteria overlap without being necessarily contradictory. Successive enlargements carried out by Caliphate and Christians architects are a lesson about how to deal with a building and how to adapt to different needs over time. When we arrive at its forest of columns from which emerges the volume of the cathedral, we feel overwhelmed by a myriad of historical data, which often remain in the anecdote, and which are reflected only in a very simple graphic documentation that does not capture the complexity and quality of each actions and relapses into the romantic topic whereby Christian interventions, which have notably alternated the building spatial and religious conception, blocks the appreciation of the Caliphate abstract and neutral space and have therefore inferior quality. 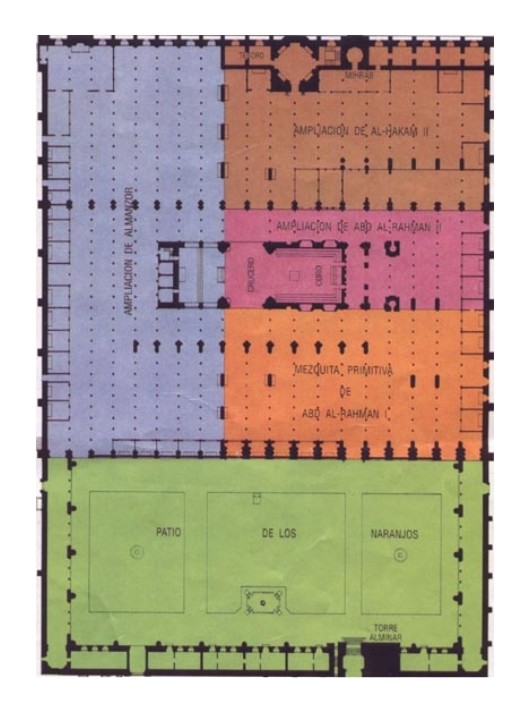 Touristic plan using colours to show different muslim additions but ignoring the christian ones.
However, if we analyze the subsequent sequence of actions, we realize that each of them was built with a deep understanding of existing architectural potential to such an extent that we can not talk about enlargements to the original Umayyad Mosque, but new mosques where former spaces are absorbed as a part, a process that continues with the Christianization of the temple. Final result is a holistic understanding of the Islamic stage that transcends successive interventions to wrap equally to the two Christian cathedrals, which are space and structurally integrated into the Islamic building. 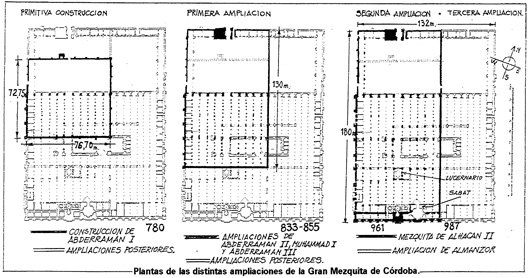 Sequence of consecutive muslim additions over current floorplan; this allow us to understand its spacial changes. 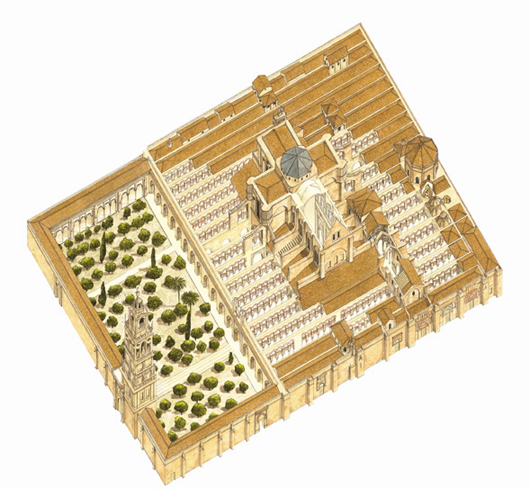 Axonometric view: some parts of the interior are seen and show different spaces: Villaviciosa Chapel, mirhab and both christian cathedrals surrounded by former mosque.
Architecturally we can establish three different periods in the history of the Mosque: Islamic period with successive enlargements / construction of new mosques. As we will see, successive emirs and caliphs didn't only enlarge the building, but they built real new mosques in which the former were absorbed as a part. After Christian conquest the building was consecrated as Christian church. While all mosques in Cordoba were demolished, Aljama Mosque was preserved and cathedrals were built inside it (Gothic in 1489 and Renaissance in 1523). Roofs were replaced in 1740 and all the arches painted in white, giving an unitary appearance to the Cathedral-Mosque that will only last a few decades. Restoration / preservation stage begins in 1815, with the restoration of mirhab. 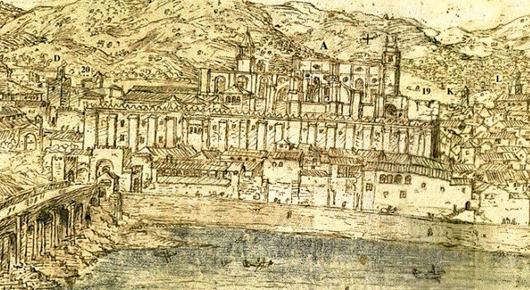 The Mosque-Cathedral in 1567. Detail of a drawing by Anton Van den Wyngaerde 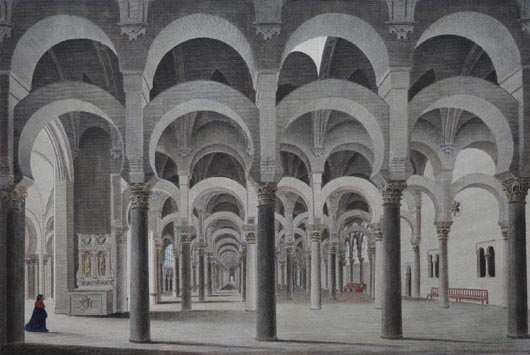 Interior of the Mosque-Cathedral in 1806, engraving by Alexandre Laborde. Arcades were still painted in white.
Until then interventions had been natural, following principles that were considered new by the artist. These principles exceeded previous positions, participating in the idea of progress. But restorative mentality breaks that and sets its objectives in a moment of the past. First two stages were time for artists, who take part in the temple, loving and destroying it to build something new and necessary thorough the knowledge of its architectural reality. The third is restorers time, who take care for history and so they are its prisoners. 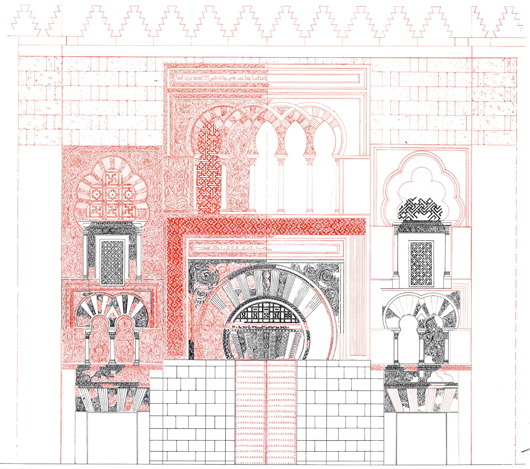