Cathedral-Mosque of Cordoba for architects (IX): the restoration 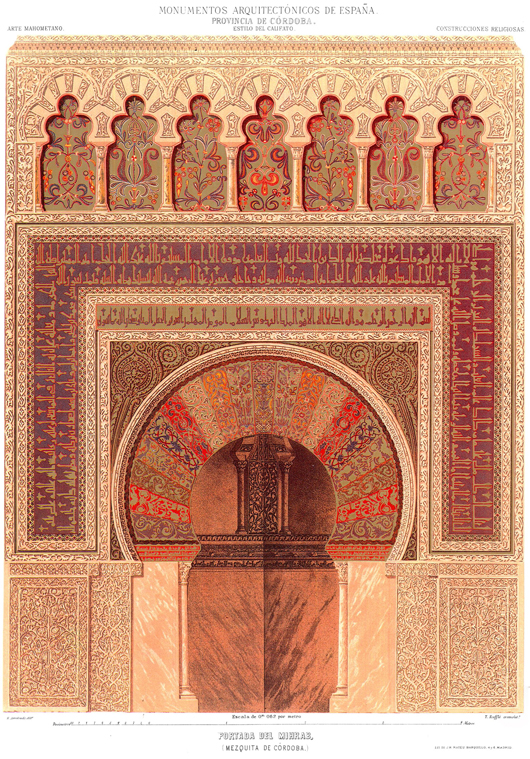 Mirhab mosaics were restored in 1815. This action is the beginning of a recovery process of Islamic building that will reverse many of former interventions.
Most of these restorations were made by architect Ricardo Velázquez Bosco. Between 1907 and 1923, following the theories of Viollet le Duc, he sought to improve the building returning its Islamic character as far as possible.
Velázquez Bosco demolished most of baroque vaults to replace a coffered ceiling similar to the original one. He defined after an intense study of the temple evolution. However his restoration removed the luminous unity light achieved in 18th century. Trying recover what he believed was the original floor, he changed ancient ceramic tiles for a Macael marble one. Although it lacked historical accuracy, at least dignified the deteriorated floor. 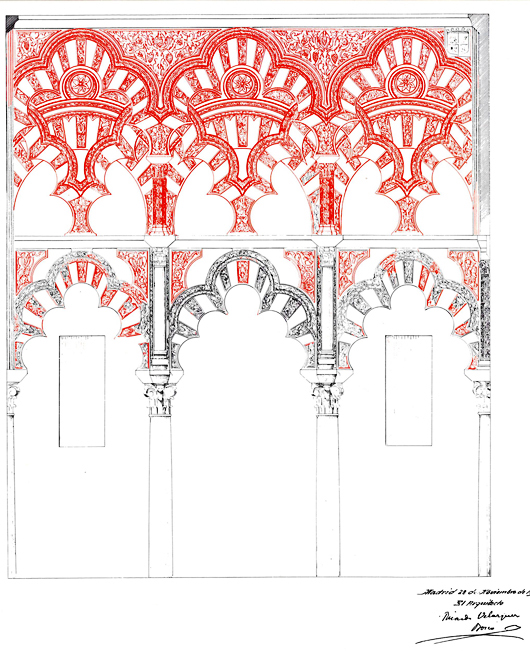 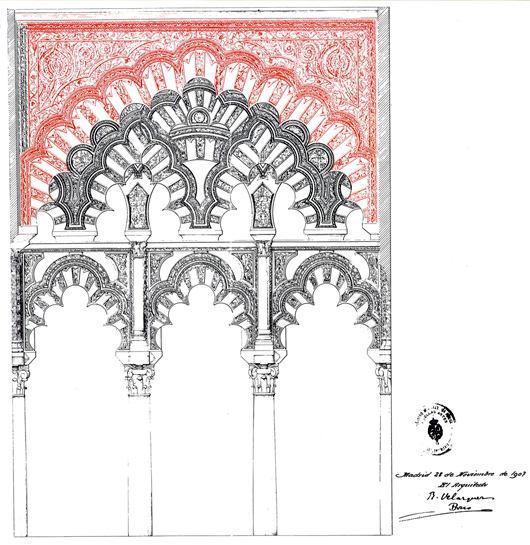 Velázquez Bosco, Ricardo. Restoration of Capilla de Villaviciosa.
In doors and other elements, Velázquez Bosco tried to emulate decoration preserved in other parts of the building, and while it is entirely invented, he hired very qualified craftsmen from Cordoba to its execute them. 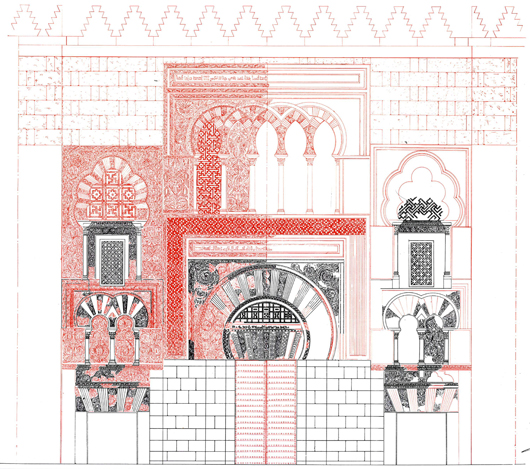 Velázquez Bosco, Ricardo. Restoration of a door facade.
Through his actions, the architect recovered the early Islamic construction formal idea. He claimed that restored part could not be distinguished from original by using similar materials and techniques and competent skilled craftsmen for their execution. Despite tremendous formal quality of his intervention, it will always be limited by the "ideal romantic image" that he printed to the building and which was exactly follows Viollet le Duc theories. However, Velázquez Bosco must be understood as the latest and perhaps final intervention on this Islamic columns forest with its towering Christian cathedral which has already met the 1200 years.
Lecture taught at Notre Dame School of Architecture in South Bend, Indiana (USA), January 26, 2011.
Author: Pablo Álvarez Funes
Publicado por Arq. Pfunes Etiquetas: Arquitectura islámica, Arquitectura religiosa, Catedral, Córdoba, Edad Media, España, Mezquita de Córdoba
Enviar por correo electrónicoEscribe un blogCompartir con TwitterCompartir con FacebookCompartir en Pinterest