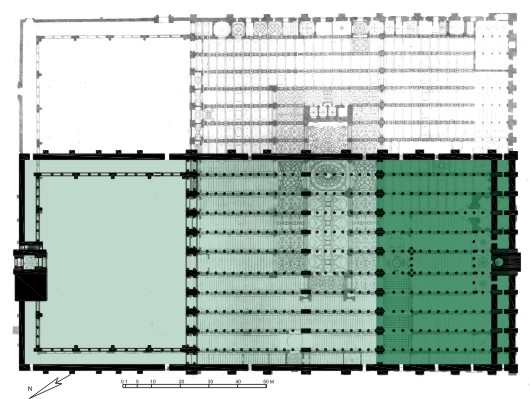 Al-Hakam II enlargemente over current floorplan.
Al-Hakam II enlargement was the most important extension made in Muslim period. It completely transformed the mosque and introduced a new spatial order. Mosque of Abderrahman I was a spacious interior which eliminates Christian processional direction while maintaining memory of Great Mosque of Damascus. With Abdurrahman II enlargement space is neutralized leaving it almost squared. 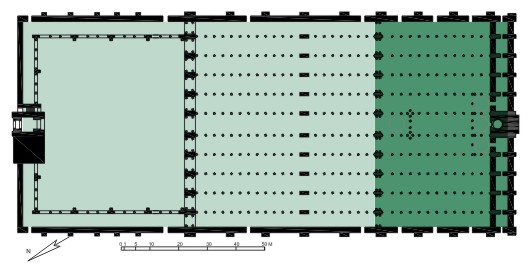 Floorplan of Al-Hakam II's mosque
Al-Hakam II architects reaffirmed depth sensation by adding twelve bays and using new elements and formal mechanisms so that the existing building was turned into hall of new Mosque. Although the size of this intervention is similar to first mosque, spatial contributions makes it something new and different. 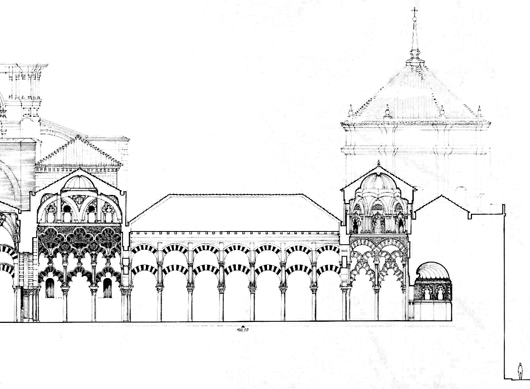 Section of Al-Hakam II enlargement, from Capilla de Villaviciosa to Mihrab.
Qibla wall was drilled again and double columns were added to reinforce the concept of transition from one space to another. Most important contribution is the construction of a series of lanters in high domes using a ribbed structure. This will pave the way towards mirhab and will create independent and autonomous spaces, capable of being valued by themselves, despite being supported on the generic mosque columns frame.
First of these spaces, known as Capilla de Villaviciosa, is located on axis leading to mirhab at the beginning of Al-Hakam II expansion. It occupies three bays in central nave and its area is virtually closed with three more columns. This simple and lightweight plant had to support a heavy dome. To solve this, the architects working in the mosque found an useful solution consisting of a series of interweaving foliated arches which brought stability and solidity to the construction, designed initially to support a wooden structure. Through a delicate geometry work, this virtual wall is connected to the dome, made from ribs, offering a great masonry work one hundred years before ribbed vaults appeared in France. 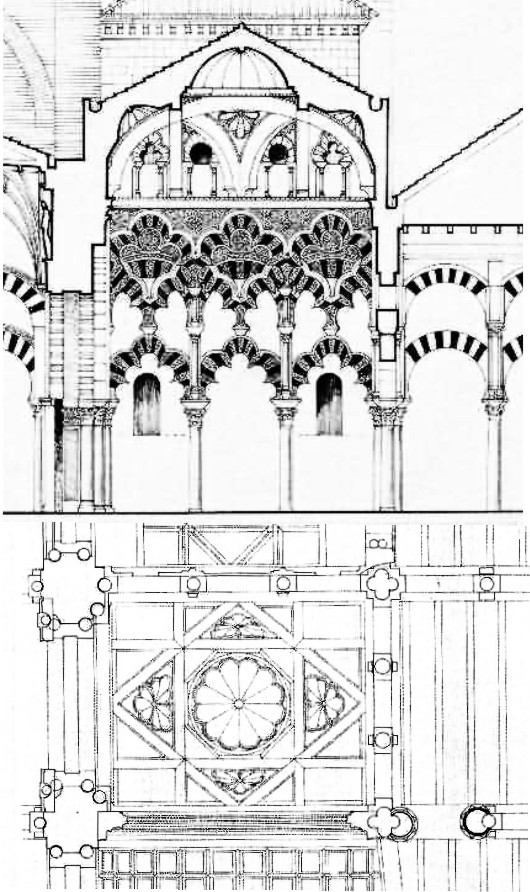 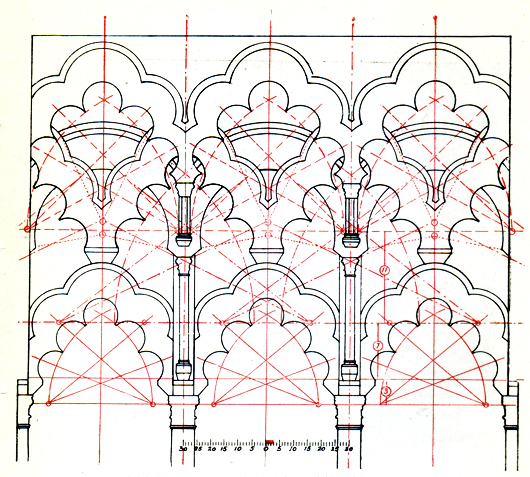 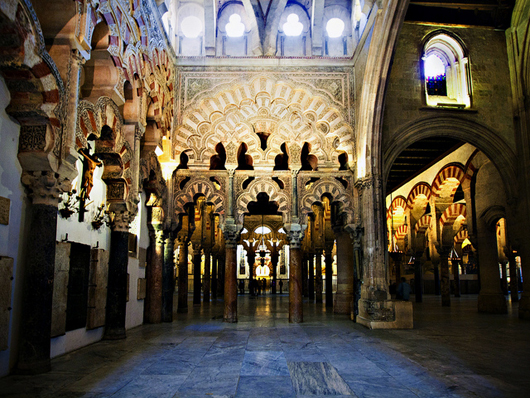 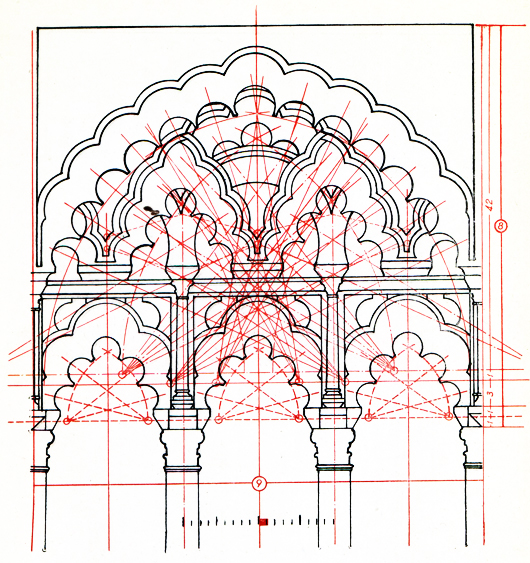 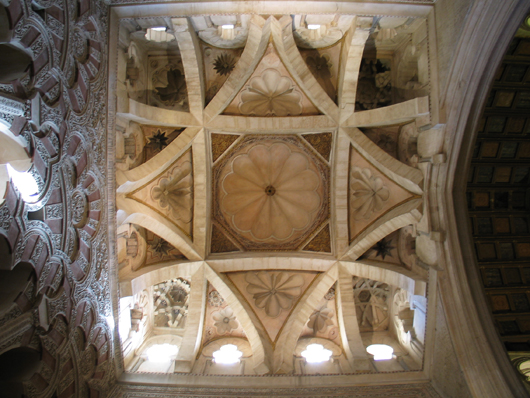 Architectural scheme of Capilla de Villaviciosa
Capilla de Villaviciosa formally marked the beginning of the new enlargement, enhanced by the overhead lighting that adds a milestone in interior penumbra. This system will be exactly repeated between bays that precede mirhab, which will become independent by using columns in the space of the nave. Thus, first two interventions neutral space led to a new spatial sequence in which light plays an important role in the building interior understanding. 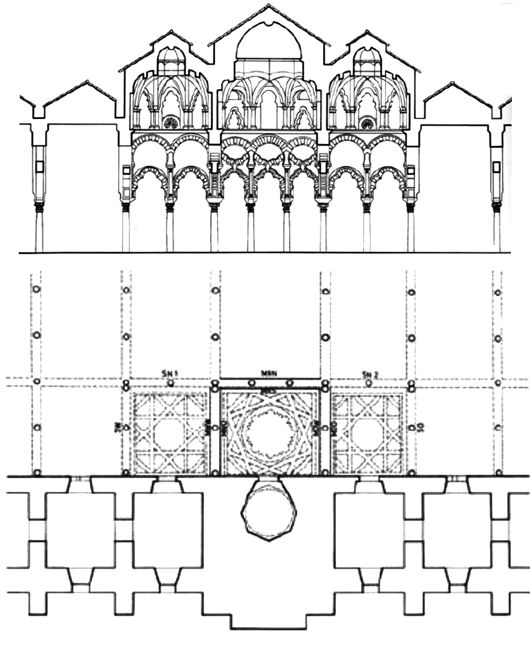 Floorplan and section of Maqsura in the Mosque of Cordoba 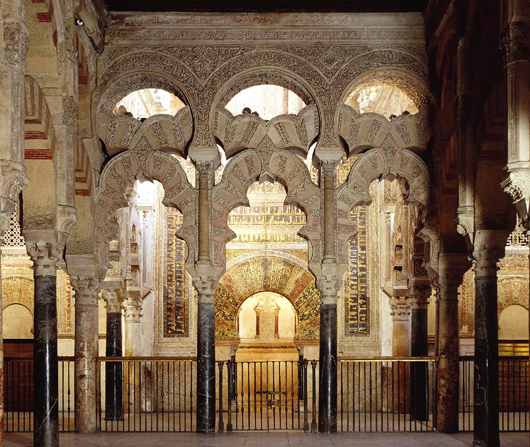 Maqsura Arcade in front of Mihrab. 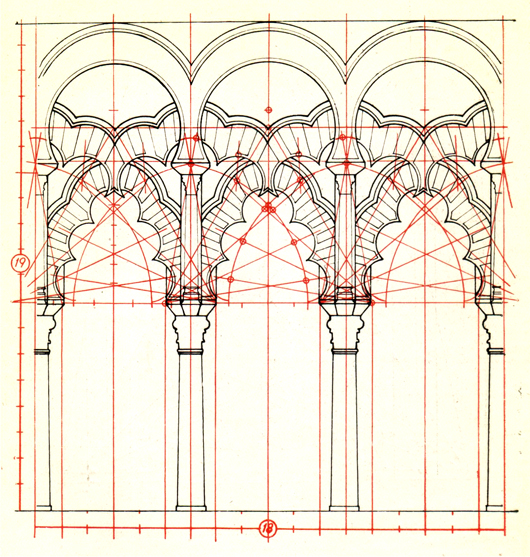 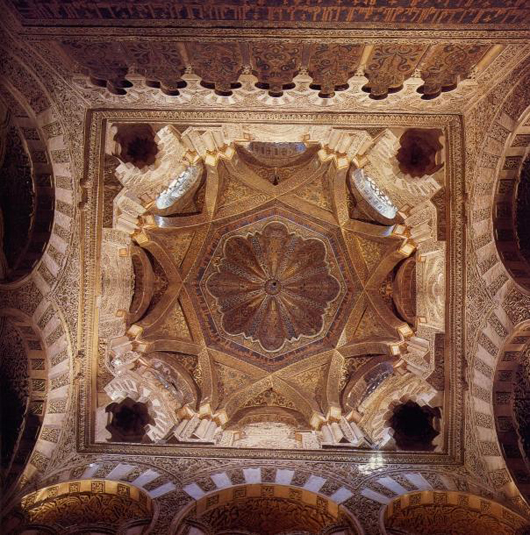 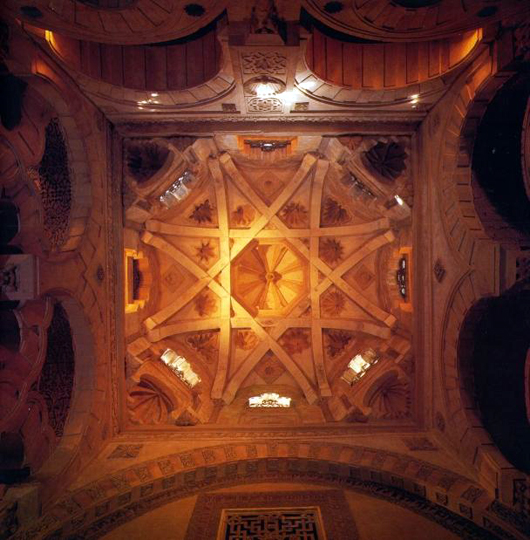 Maqsura lateral dome.
Ornaments in Al-Hakam II phase are spectacular. Capitals used in Medina Azahara appear defined in composition and quality. Mirhab emphasizes its importance by transforming into an octagonal spaced covered with a shell-shaped dome. Mirhab front and domes that precede it are covered with mosaics executed by Byzantine craftsmen sent by Basileus Nicephorus Phocas. 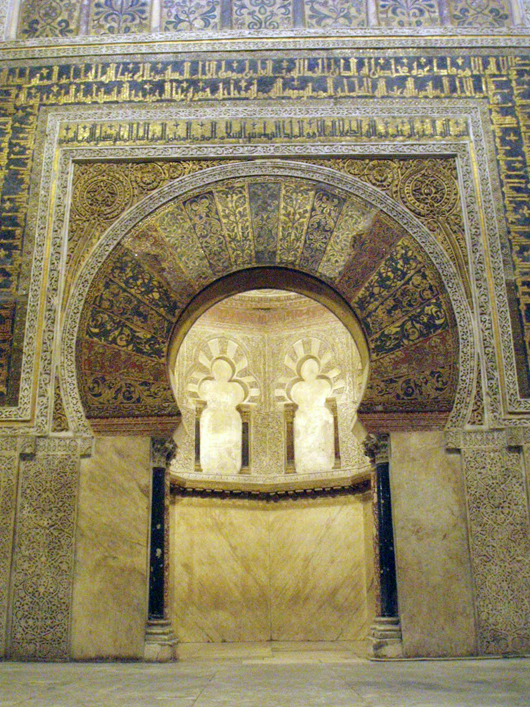 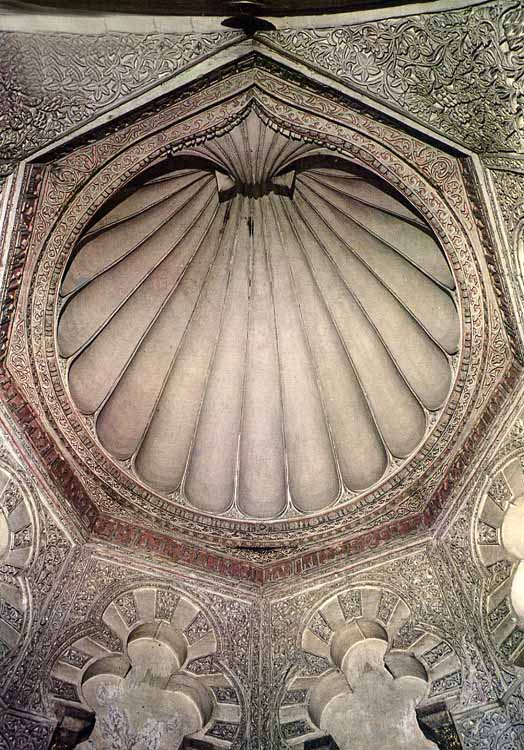