Cathedral-Mosque of Cordoba for architects (II): The Mosque of Abderrahman I. 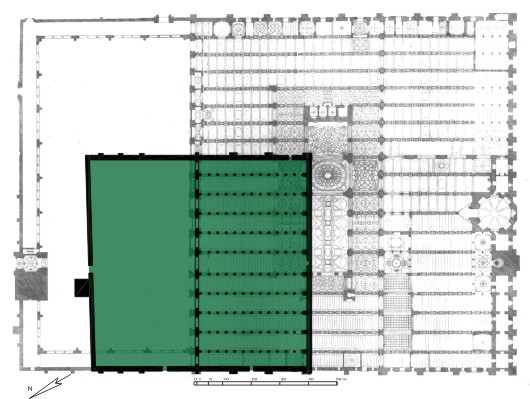 Mosque of Abderraman I over current floorplan.
The Mosque of Cordoba was built by Abderrahman I who wanted to show the power of the independent emirate that he had established in Iberian Peninsula. New emir established his capital at Cordoba (Qurtuba), a city that enjoyed a strategic, political, economic and cultural importance from Roman times (Patricia Corduba), because it was the last bridge across Guadalquivir River and a direct link with the interior of Hispania. 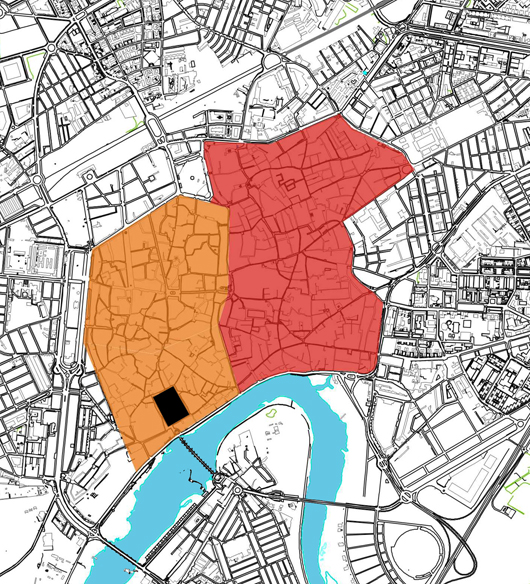 Cordoba in Middle ages. Orange: limits of roman city; red: muslim enlargements; black: Great Mosque.
The site chosen for Aljama Mosque was the holiest place in Christian Córdoba, the Visigothic Basilica of San Vicente. With this choice the new reaffirmed in its founding purpose and therefore the architecture to be developed should be exemplary. 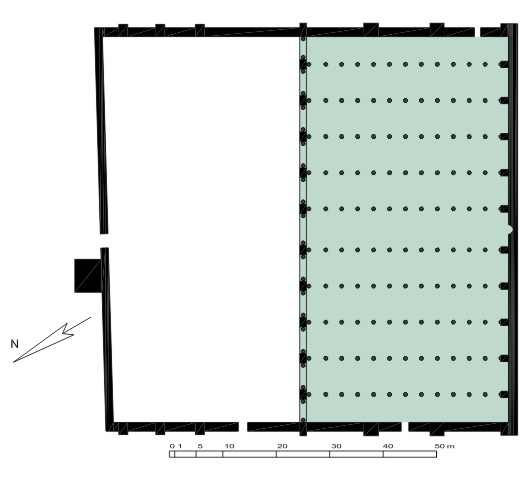 Mosque of Abderramán I. Floorplan
As a member of Umayyad family, Abderrahman I wanted his architects to respect precedent of Great Mosque of Damascus. This mosque was the typological basis for later mosques. It defined Islamic religious space, basing on Christian architectural structures and elements. Opposite to axial alignment and centralization towards the altar in Christian churches, the mosque offers a neutral uncharacterized space. Christian focal point and worship center, the altar, is moved by a line focus, the qibla, a prayer wall, where the mirhab is a niche that has no other function than to indicate the direction where to pray. 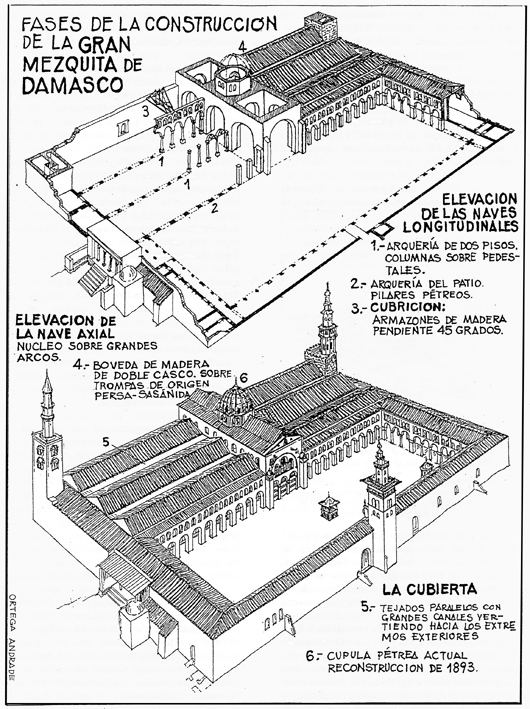 Architectural Scheme of Ummayad Mosque in Damasco, Syria (705-715).
But mirhab implies a need for symmetry as formal principle, and the necessary repetition of arcades bays without hierarchy. Thus, longitudinal and processional Christian church, is transformed into a building with a courtyard for ritual ablutions, as a sacred city, in which transition to covered space must be understood as a step in the relationship between Muslims and Allah.
The Mosque of Damascus must be understood as an evolution of Roman basilicas, with no axial element. It will be structured from equally spaced columns placed in parallel walls. Modular variations are due to formal architectural reasons rather than ritual requirements. 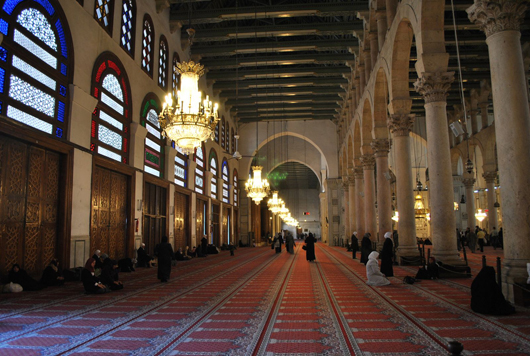 Interior of Ummayad Mosque in Damasco, Syria (705-715). Arcades are pararell to qibla.
Although the Mosque of Cordoba respects typology established by Damascus, its formal structure elements undergo such a transformation that should be considered as a unique and singular architectural event.
First element that makes it unique and special is the change in walls orientation, which appear placed perpendicular to the Qibla and not parallel to it as was usual. We use the word walls and not arcades because its disposition and their relationship with the building structure transcends the concept of arcade. 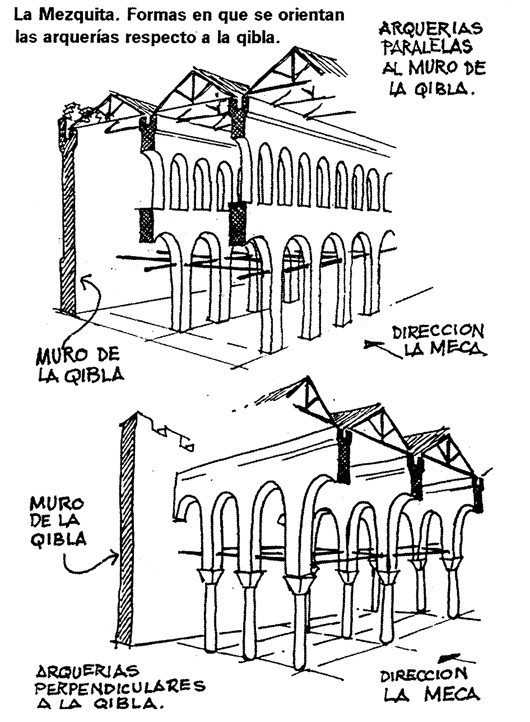 Arcades in a mosque: parallel or perpendicular to quibla.
Walls in the mosque have double arcades; this way height can be increased without breaking proportions, as happened in the arcades of Great Mosque of Damascus. Cordoba arcades are directly inspired by the Milagros Aqueduct in Mérida, ancient Roman Emerita Augusta. From its ruins columns and capitals were taken as basis and inspiration for the successive enlargements. In this context (reuse of materials and types), the Mosque is understood as a system composed of wall-aqueduct that go perpendicular to qibla and are responsible for the spatial experience. The only perceptible direction would then be perpendicular to qibla. 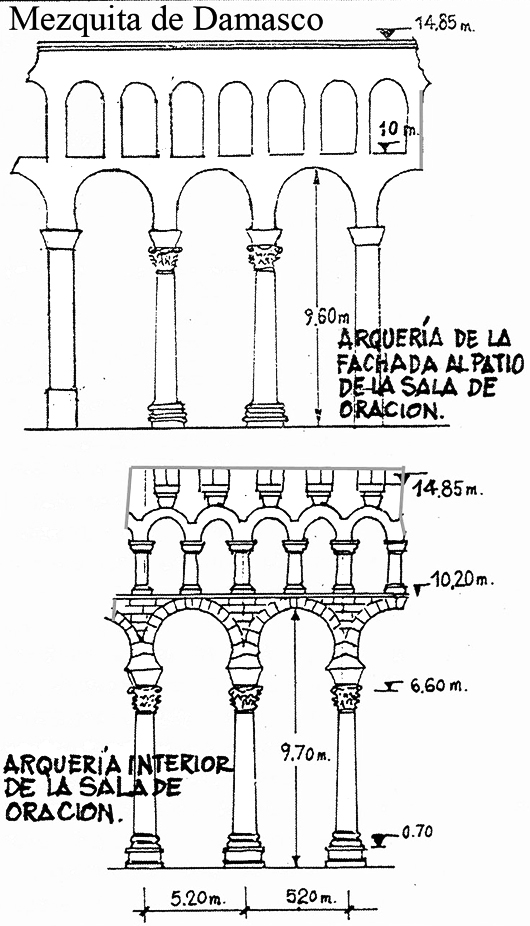 Perspective of Merida Aqueduct (1st c. AD)
Roof was resolved using trusses, which rest on arcade-aqueduct edges. To allow a correct sizing, arcade upper level are a bit too thick, but it is camouflaged with bow arches which really takes its visual proportions. This large walls transverse dimension is reduced through two corbels or rolls brackets, which are an original Umayyad element. 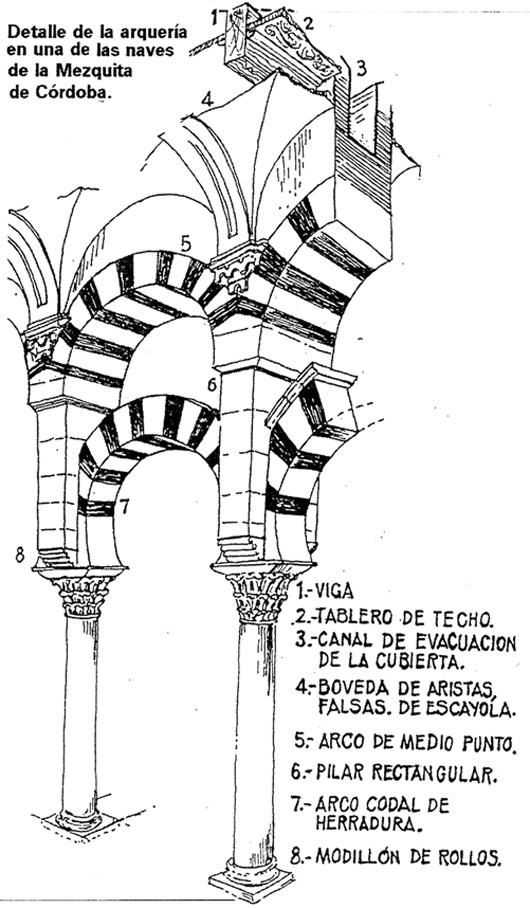 Arcades in Mosque of Córdoba
Upper arch is semicircular, but bottom is a horseshoe, following Spanish-Visigoth tradition, probably late Roman, like the alternating two colored stone blocks and brick voussoirs. Pillar and corbels load onto the cornice, with no Roman architectural moldings, which transmit their weight to capital and shaft, which uses buried basis as foundation. 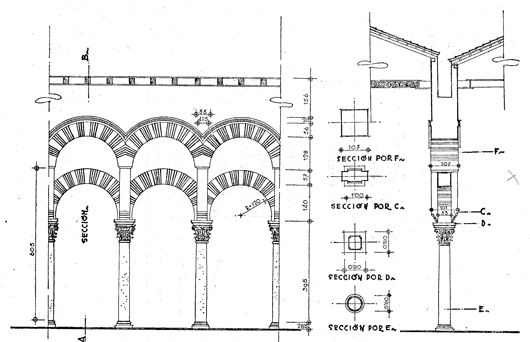 Elevation and section of arcades in Mosque of Mezquita de Córdoba
But if we consider these parallel walls thickness, bow arches could be understood as a continuous vault. This virtual produces a second direction, parallel to the qibla, thus forming an abstract and infinite space through the intersection from both visual directions.

Interior of Mosque in foundational core. View through qibla and visual intersection.
The other characteristic element of the mosque is the colored stone and brick voussoir. This element will mark all Muslim architecture in Spain. Its origin as the structural system can also be dated to Milagros Aqueduct. They have a tectonic purpose because they explicitly show structural arch work and its meeting with pilasters, as well as highlight interior space. 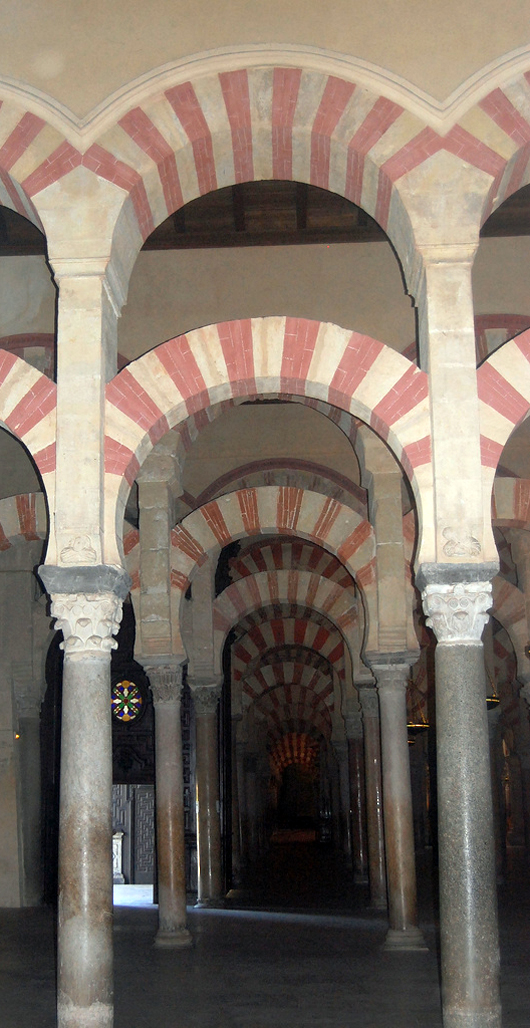 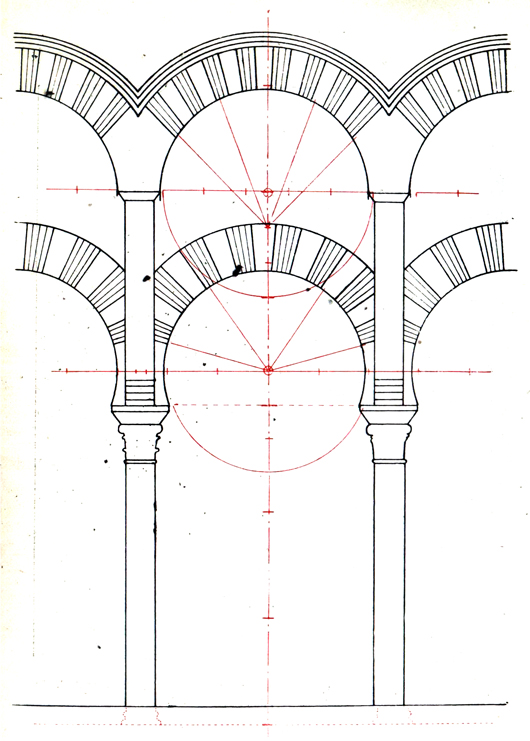