All civilizations have a characteristic architectural expression which is created in response to a series of climatic and cultural conditions. Just as classicism, as built in America or in Europe, recalls to Greek-Roman Mediterranean, Islamic architecture maintains a deep relationship with Arabic origins of Islam.
Life of Muhammad.
Islam emerged in 7th century polytheistic Arabia when Muhammad, a merchant from Mecca, begins to have a series of divine revelations in which he is threatened to be "sent from God" (610 AD) and to preach their teachings while fighting against traditional polytheism of the region. This fight against traditional religions created serious problems in Mecca, from where he decided to emigrate (hidjra, Hegira) in 622, along with his followers, to the nearby city of Medina. This marks the beginning of the Islamic calendar and his stay in Medina will fully define the structure of the new religion, as well as giving us the typological base for Islamic religious building: the mosque as a representation of Muhammad's house. 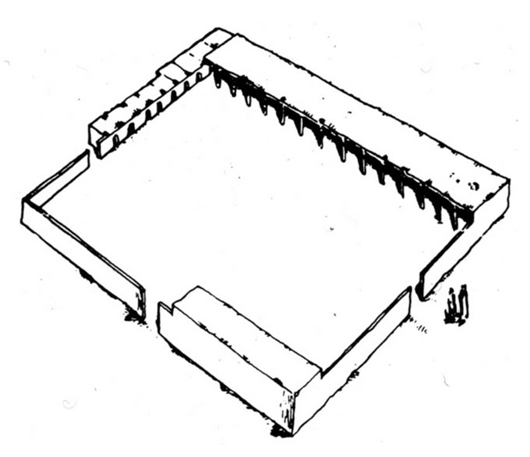 Muhammad's house in Medina, ideal reconstruction.
Over the years he spent in Medina, Muhammad gave a municipal regulation to the nascent Muslim community and came into contact with the Jewish community (623), which would be eventually expelled from the city, after appropriating a part of their beliefs, as the consideration of Abraham as the first Muslim who aimed a monotheistic god (hanif) and founder of Kaaba in Mecca as a place of worship of one God, Allah. In 624 he changes the direction of prayer towards Mecca (South -East), as had hitherto been Jerusalem (Northwest). Between 625 and 630, a series of skirmishes between the people of Medina, where Muhammad showed his skills as a strategist who gave successive victory and consolidated the position of the growing community. Finally in 630 Muhammad entered Mecca victorious, "purified" the Kaaba idol, and established the pilgrimage to Mecca as a Muslim institution. Shortly after his "farewell pilgrimage" to Mecca in March 632, Muhammad died in Medina on June 8 of that year, while planning the conquest of Byzantium and Persia.
Religious basis of Islam. Koran and the five pillars of Islamic life.
All the teachings of Muhammad were recorded in the Qur'an, which canonical composition takes place during the reign of the third caliph (644-656). Koran is divided into suras, which contain verses; its organization does not correspond to its original chronology, but are ordered according to their length in decreasing sequence preceded by a theme. According to Muslim belief, the original writing of the Koran is registered in heaven since the beginning of time and the revealed Qur'an coincides exactly with it. Hence its immutability and the need for Muslims to learn Arabic, languaje in which was revealed. This aspect will be a cultural unity to Islam, as Latin and Greek were for Christians and Hebrew for Jews.
Muslim religious life is based on the five pillars or foundations (Arkan), which insist on the unity of the Islamic community (umma) and general obligations to God and neighbor:
1.- Public profession of faith (Shahada): "There is no God but Allah and Muhammad is his prophet" as an affirmation of the oneness of God and the legitimate mission of Muhammad. It is the first step to convert to Islam.
2.- Ritual prayer (salat) is performed five times a day at the call of the muezzin from the mosque minaret. Prayer can be performed anywhere, after a series of ablutions as a purification ritual and is always in the direction of Mecca as a sign of the unity of all Muslims. In the mosque, men and women pray separately in rows behind the imam, which has its place before the mirhab (niche indicating the direction of prayer). Most important prayer is at noon Friday, including a sermon by the imam from the minbar (pulpit). These elements are particularly relevant in Islamic architecture. Unlike Judaism and Christianity, Friday is not holiday for Muslims. 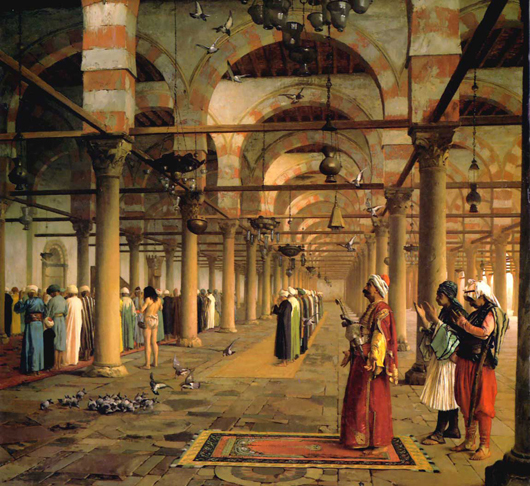 Gérome, Jean-Leon. Public Prayer in the Mosque of Amr, Cairo. 1870
3.- Giving alms to the poor (Zakat): voluntary in the origins, a tax system will be soon structured and designed to protect most disadvantaged (poor, widows, orphans, the sick, pilgrims, debtors and fighters of the faith) as a kind of Social Security.
4.- Ritual Fasting (Saum) during the month of Ramadan (ninth month of Islamic year and varies from one year to another as the Islamic calendar is lunar-based): During this month Muslims abstain from eating, drinking, smoking and sexual relations from sunrise to sunset. This is a period of conversion and penance during which daytime social life freezes while the night is full of ceremonies and social events.
5.- Pilgrimage to Mecca and around (Hadjdj) is required for every adult Muslim at least once in their life. Pilgrimage leads to the holy cities of Islam, in which center is Kaaba, cubic formed and cover with a black veil, with its sacred "black stone" inside the Great Mosque of Mecca (in the Koran, was erected by Abraham and his son Ishmael), often also combined with a visit to the house of Muhammad in Medina.
Together with these five pillars, Koranic law (sharia) checks all aspects of Muslim life. Islam is both a "secular religion", because there is no religious hierarchy, as a "legal religion" because who attends daily and behavioral issues is a lawyer and not a priest. Islamic scholars (ulama) are knowledgeable about religion and laws, definitely codified in 9th century from the immediate successors of Muhammad (sunna, custom, hence the name Sunni, which is majority Islam). By contrast, Muslims who were positioned against the sunna ended professing Islam Shia (from Shiat Ali, a supporter of Ali, Muhammad's cousin and son-in-law, as the legitimate successor of the Prophet).
Tolerance in Islam.
Muhammad shows himself as the last and final prophet belonging to a line of illuminated who, since primitive times, preached monotheism. According to Islam, God would have made a covenant with the descendants of Adam, especially with Noah; Abraham is considered the first prophet, believing in the oneness of God; Moses is the writer and holder of the Torah; and Jesus the admired preacher who spread the gospel and outstanding prophet direct ancestor of Muhammad. This sequence ends with Mohammed, the "last (ring) of the prophets", and God's Revelation through the prophets is completed. Hence, early Muslims considered themselves superior to believers of the two other monotheistic religions, Christianity and Judaism, but also showed some initial tolerance with them because according to Mohammed, they should not have shown difficulty in accepting Islam since they had already been offered the true religion but had rejected it. Over time, and as Islamic communities grow, initial tolerance gradually disappears, although it is a cycle and periods of religious tolerance are followed by other of intransigence. 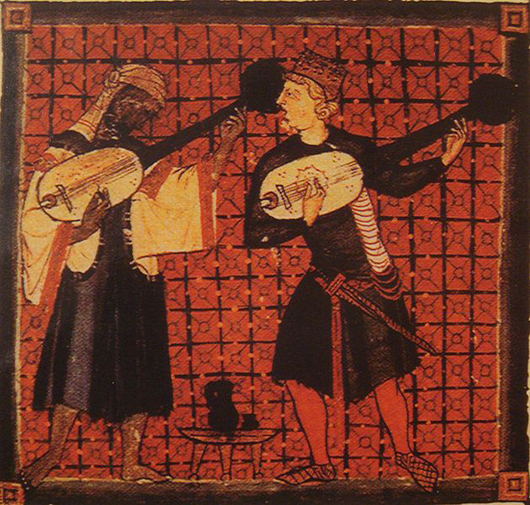