Historical context of Islamic architecture (I): The "four rightful caliphs" (632-661).

The "four rightful caliphs" (632-661).
The time period between Muhammad's death and the coming to power of the Umayyad dynasty (661) is very important for understanding Islam. In the Sunni tradition, the time of the "four rightful caliphs" is considered a golden age, when the community (umma) was conducted fairly and pious, lived under the laws of the Prophet and Islam began to display their power. The Shiites, however, consider that first three caliphs are mere usurpers and recognize only the Imam Ali, the fourth caliph of the Sunnis, and their blood descendants, as the right of succession. In fact, the era of the "four rightful caliphs" plays an important role in the debate over social order as life experiences from this period form the basis of Islamic legislation.
The first caliph (khalifa, "representative") Abu Bakr (632-634) was Muhammad's father-in-law and was one of the first to follow him in the Hijrah in 622. During Muhammad's illness had led congregational prayers and that helped him to the succession; considered by many as the Prophet's "alter ego", he knew how to use his authority to consolidate the union between different Arab tribes.

Caliph Abu Bakr's empire at its peak, 634.
Second caliph, Omar ibn al-Khattab (634-644) was also a father-in-law and friend of the Prophet in Medina and was one his main advisers. During his government foundations of the Islamic empire are settled, thanks to his conquests planned with his generals Khalid ibn al-Walid, Amr ibn al-As and Sad ibn Abu Waqqas and social reforms carried out since year 637. Pious man, added to the caliph the title of "Lord of the believers." He was killed in 644 by a Christian while he was walking to a mosque.

Caliph Omar's empire at its peak, 644.
Third caliph, Uthman ibn Affan (644-656), Mohammed's son-in-law was member of the Umayyad family, and one of the richest merchants of Mecca. He was a pious man, but without personal ambition or leadership, he delegated political responsibilitiesin his relatives, which made him unpopular. He was forced to resign and when refused was murdered in his home while praying.

Caliph Uthman's empire at its peak, 656.
Fourth Caliph, Ali ibn Abu Talib (656-661) was both Muhammad's cousin and son-in-law. He was one of the first Muslims and their supporters consider him the first Muslim after the Prophet's wife. Since Muhammad's death he had supporters who wanted him to assure the caliphate, designating themselves as "Shiat Ali", a supporter of Ali, from where the word "Shiite" comes. Despite being elected caliph in 656, neither Mohammed's widow nor Uthman's relatives, recognized him as caliph, making a tense situation for the young religion. In 657 a cousin of Uthman, Muawiyah, governor of Syria, rebelled against Ali, who, to avoid a civil war, agreed to share sovereignty. However, this did not please much of the community and appointed Muawiya as Caliph and launched another rebellion; despite being defeated by Ali in 658, the fourth Caliph was finally killed in 661 when he was walking to a mosque, starting the Umayyad Dinasty.

Caliph Ali's empire (dark green) at the beginning of civil war with Muawiyah (pale green), 657-661
On the death of Ali, Islamic empire had overcome Arabian Peninsula natural limits and spread from Libya and Egypt to Mesopotamia and Persia. Until then, Islamic architecture was limited to semi-nomad buildings typical from desert; but after conquering prosperous Egypt, Syria and Mesopotamia, and needing to give material expression to their power and their faith, Muslims will use Persian and Greek-Roman architectural tradition for their mosques, palaces and fortifications. 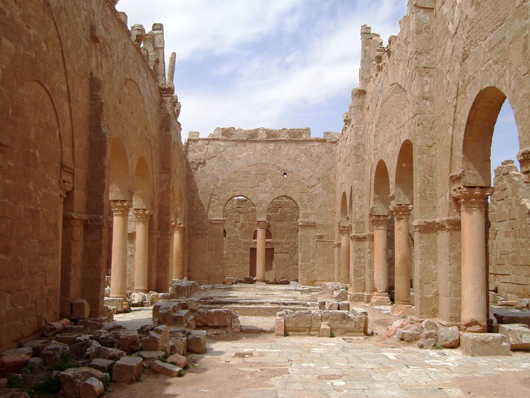 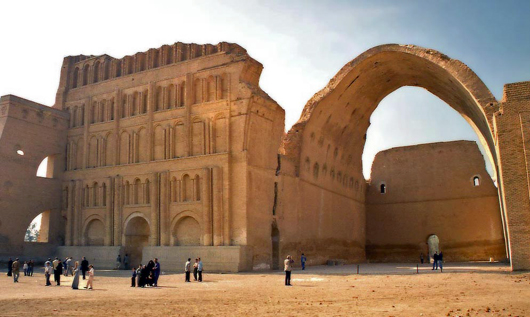